Social network graphs sum up a lot of information about how work gets done and how people communicate; therefore, careful analysis is necessary. Frequently the best way to analyze a social network is to inspect it visually.

Each person – called a node – is illustrated by a dot. The color of the node is determined by which group the person belongs to. In most corporate studies, groups are defined as the departments within the company but a group can be any meaningful division of people. Other ways to group people could include by industry experience, seniority, office location, job function or even pay level.

Lines between persons represent relationships. These lines are called ‘ties’. Arrows indicate the direction of the relationship. An arrow that points towards Person A shows that this person has been indicated by Person B, whereas an arrow pointing away from Person A towards Person B shows the former indicated the latter. A line with arrows at both ends is a mutual relationship.

When a person is highlighted in Socilyzer, his or her relationships are colored to ease the interpretation. Green lines show mutual relationships, red lines out-bound ties and blue lines in-bound ties. See the illustrations of different relationships below. 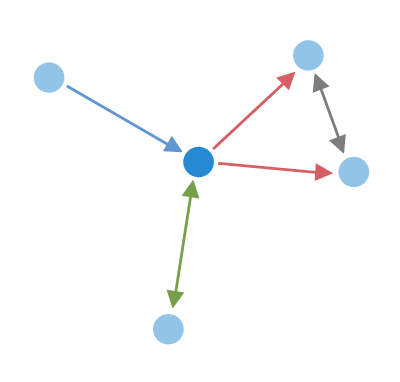 A force-directed graph places nodes dynamically based on the ties between them. In general, people who are related are shown close together, whereas unrelated people are shown further apart. For this reason, force-directed graphs are brilliant for displaying clusters and lacking collaboration between groups.

A question to ask when analyzing a visualization is: overall, does the network look dense or is it scattered in groups? If it is dense, most people are connected and it shows a high degree of collaboration and information sharing within the network. Whether this is desirable depends on the context - it can also be a sign of inefficiency. A visualization example is provided below.

Network on an Individual Level

Often the part of a social network analysis that is the easiest to analyze is the individual level.

Employees with high degrees are easily identified as these are the people with many connections and they often appear in the middle of clusters or the network.

Next off the direction of ties can be assessed: are the ties mutual, in-bound or out-bound? Are the directions of the ties in accordance with your expectations? E.g. if you asked about a specific workflow, do you see the one-way information flow you expected?

Finally, who the individual is connected to can be analyzed. You might want to know who each employee has ties to: are they from the person’s own group? Is the person someone who ties groups together? A person that connects clusters will have a high betweenness measure and can be described as a bridge builder or, possibly, a bottleneck.

Network on a Group Level

On a group level you will be looking for clusters: do the groups appear dense, i.e., with many internal ties? How are the groups tied to the other groups in the network? Does the graph indicate clusters that differ from your expectations? E.g., is half of one department more connected to another department than to the other half? An example of a complete social network is shown below. 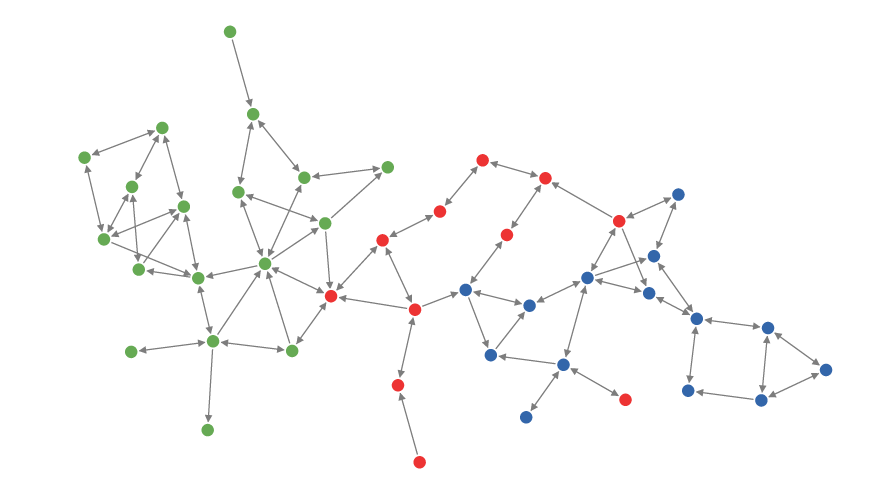 Observe and Conclude With Caution

It is important to remember that social network graphs only are snapshots of an organization and need to be interpreted in the context data that the study provides. For instance, if an individual appears isolated, it might just be in regards to these people and for the question’s scope.