How to improve performance in any organization

Social network analysis helps you visualize, analyze, and improve how people work together.

Effectively managed collaboration is the key to organizational success.

Socilyzer is used by consultants, managers, and researchers at

Learn how an organization works

Hover over highlighted sections to learn about informal networks. 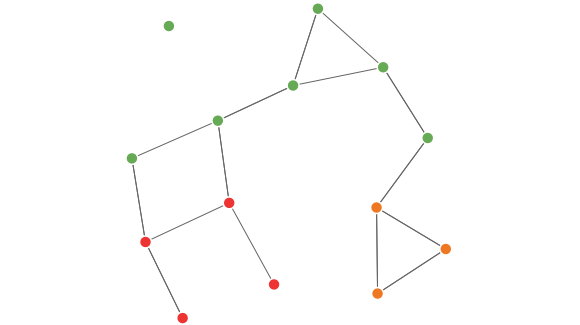 A graph visualization is a powerful tool when analyzing a social network.

On an overall level, the visualization shows how fragmented a network is as well as its density. A dense network will have a high number of ties per person.

A natural grouping of people based on their interaction alone.

Often it is interesting to compare cluster with how you are formally organized.

Depending on the survey context, bridge builders can also be seen as bottlenecks.

This person is the closest to everybody else in the network. In other words, this person has the fewest "steps" to reach all of the others.

The graph's force-directed layout will place such central individuals and groups in the graph's center.

Someone without any connections is isolated.

It is important to be aware of the context, i.e., the particular type of interaction being studied and who is included in the study.

Focusing on the orange department, we can see they are fully connected internally.

We can also see they only use 5% of the possible connections (1 out of 21) to the green department and has no ties to the red department.

What organizations use these analyses for

Get an overview of the collaboration within and between groups such as geographical units, project teams, and business units.

Identify close-knit groups and organizational silos within your organization - and the individuals who tie them together.

Map processes and people's roles in them to identify improvement opportunities

Characterize your organization based on general level of knowledge sharing, innovation, competitiveness etc.

What our clients have achieved

It was confronting to see that far from all offices were living our values - and to hear how some colleagues felt about working here. On the back of this work, we launched a transformation programme and the initial results are promising: we work smarter, not harder; sales are back up; and most importantly we have seen a significant lift in employee satisfaction.

How Unilever made new connections in Procurement

Unilever Procurement was looking at how they could improve cross-regional collaboration. To help them they engaged Silverman Research, a consulting firm.

The outcome was insights into regional integration, identification of central employees and lists of mutually desired communication. Read the case